For contractors and employees

Numbers are limited due to COVID-19 so we recommend you secure your place today to ensure you don't miss out!

Registrations will remain open until 11th June or until the max. limit is reached. 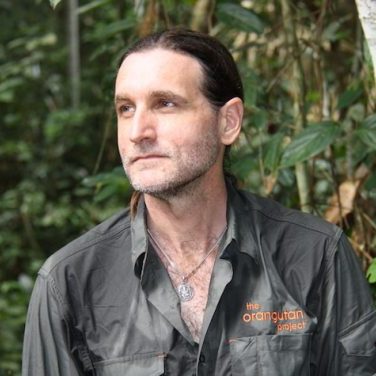 As founder and President of The Orangutan Project, Leif is driving change in social and economic behaviours in Indonesia to save the Sumatran orangutan. Based on his extensive experience working with one of our closest cousins, he will discuss the social and genetic development of humans and how this plays out in modern-day social and work structures, asking the intriguing question: "​Can we break free from our ancestral past?"

Registrations will remain open until 11th June or until the max. limit is reached.

Awarded the Medal of the Order of Australia in 2020 for his outstanding work in the field of wildlife conservation.

For more than three decades, world-renowned orangutan expert Leif Cocks has worked to secure the survival of Critically Endangered orangutans in the wild. As a zoologist, author, speaker and founder of The Orangutan Project, he is an outspoken campaigner on their behalf and a key player in developing conservation plans for their protection, including leading the first-ever successful reintroduction of a zoo-born orangutan into the wild.

A small population biologist and primatologist by trade, Leif has several academic qualifications, including a Master of Science studying orangutans, and is a worthy recipient of the John Curtin Medal, Curtin University's highest award for achievement. Leif is a seasoned public speaker and has published several academic papers on orangutans in peer-reviewed journals. He is also the author of four books – Orangutans and their Battle for Survival, the #1 Amazon Best Seller Orangutans My Cousins, My Friends, and his latest book published in April 2019, Finding Our Humanity.

About The Orangutan Project

Founded by Leif in 1998, The Orangutan Project is an international charity striving to save Critically Endangered orangutans from extinction. The organisation takes a holistic approach to orangutan conservation, including supporting the rescue, rehabilitation and release of infant and displaced orangutans, and the protection and renewal of orangutan habitat. It also recognises the importance of support at grassroots level and works closely with local communities. The Orangutan Project’s goal is to help legally secure eight intact, rainforest ecosystems so all species of orangutan can live in secure populations for the decades to come. For more information, visit www.theorangutanproject.org.