Why do Projects Fail?

Why do Projects Fail?

• Project sponsors and project managers with little know-how and/or experience.
• Poor human resource management.
• Poor management of expectations between stakeholders.
• Inability to adequately identify, document and track deliverables.
• Limited definition of pre-decessor tasks and stage deadlines including a poor assessment of time and effort required to complete each task.
• Insufficient communication within the team and between external stakeholders regarding real benefits, real progress of the project and final reporting back to the client.

Since the 1950’s, project management has evolved as a distinct discipline within management practice. Prior to the 1950’s, projects were managed on an ad hoc basis internally. After which point the discipline developed from one involving Gantt Charts to more advanced models including the “Critical Path Method” and the “PERT” models, otherwise known as Program Evaluation and Review Technique.

As project management has advanced, so has its underlying structures and rules. However certain standards, theories, and rhetoric have put its very strengths in a weaker position, diluting the vital aspects of management and tacit know-how that the role requires.

According to the Standish Rationale, projects that “succeed” do so for the following reasons:
•    End users are consulted and involved right through the development of the project.
•    The project manager have full support of the executive management. Whatever hurdles came up during the project were promptly looked into by the latter.
•    Requirements and mile-stones are clear cut and well communicated. Close interaction between all stakeholders ensures this result.
•    Expectations from the project are realistic. Ample budget and time is allotted to each stage of the project to facilitate a project happen with minimal adverse stress on human resources.

According to the Standish Reports, these points are the key reasons for failure:

•    Users have minimal input in the design and delivery of the project, only having the chance to interact with the project once it is completed and resources have been exhausted. This leads to unhappy customers and unhappy staff, as projects that were thought to be completed need to be re-opened up and re-worked again.
•    Insufficient time was given between assessing requirements to design. The final design was not evaluated enough to bring all aspects into consideration with approval from the client.
•    A tenuous relationship of pleasing stakeholders by the project manager implicated extra and untimely changes during the period of project execution, ultimately draining human resources and commitment to the project.
•    Limited support from executive management, leaving the project manager isolated without the freedom to call for more support or to show higher management the cracks in a process before they get out of hand.
•    A technically incompetent team.

Finally, their reasons for why projects end up in the dustbin of history are as follows: 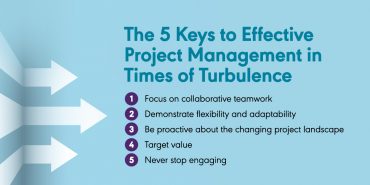 What do you need to be an effective PM in turbulent times?

The Liberation of Transformational Change