Kanban, particularly Kanban boards seem to be emerging as the ‘norm’, even expected, in today’s dynamic business environment. But what value does Kanban bring to projects and business as usual? Let’s look beyond the hype and buzzwords and understand the true value of the Kanban Method.

The word Kanban can literally be translated from the Japanese language as ‘visual sign’, ‘signboard’ or ‘card’. In recent times, Kanban boards have become a popular tool to visualise the flow of work. In its simplest format, a Kanban board shows ‘To Do’ (the work to be done), ‘In Progress’ (what we are working on currently) and ‘Done’ (completed).

The Kanban Method versus a Kanban Board

Kanban boards often appear rather simplistic but the power behind them is in understanding the Kanban Method.

The Kanban Method has its origins in lean thinking. Kanban was used originally in lean manufacturing (thanks to Toyota) for inventory control and replenishing; a typical example is the restocking of supermarket shelves based on a card (‘visual sign’) indicating low stock.

The Kanban Method was devised by David J. Anderson as a holistic approach for incremental, evolutionary process and systems change for organisations.

“There is and probably always will be a lot of discussion around the Kanban Method and whether it belongs to the lean or agile movement. It was conceived in and around lean manufacturing, but is widely used in agile settings.”

The Kanban Method is based on 4 defining principles:

The power behind the Kanban Method is in understanding the core practices:

All are important to the method, but let’s just look at one to understand how the Kanban method can appear simplistic but is powerful in incremental change.

Why limiting WIP is important

It may sound initially counter-intuitive but reducing the amount of work in progress actually increases a team’s productivity. How does this happen? Limiting WIP speeds up the rate at which work is being completed. In the Kanban method, it is more important to complete work than it is to start new work.

Ever been in a situation where you feel you are juggling so many things but not able to complete anything fast? And then you get interrupted by someone and suddenly you have another item on the go? Consider instead the Kanban approach – there is no value derived from work that is not completed, so the team focuses on work in progress and getting that work to ‘done’.

More on the Method…

The Kanban Method includes, but is more than, a board with horizontal swim lanes. Kanban, in its full capacity, not only focuses on improving flow in the short term, but also creating long-lasting and ongoing change to underlying organisational processes.

PMI is a registered mark of the Project Management Institute, Inc.

For more information on which project management methodology is right for your organisation, contact one of our professional development consultants today – 1300 70 13 14. 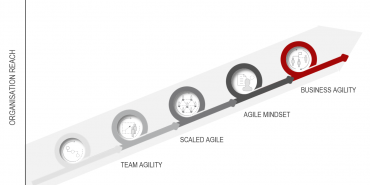 Are you Agile ready?